Best Place to Have Amala in Lagos

How Elubo is Made – Yam Flour (Amala-Isu) 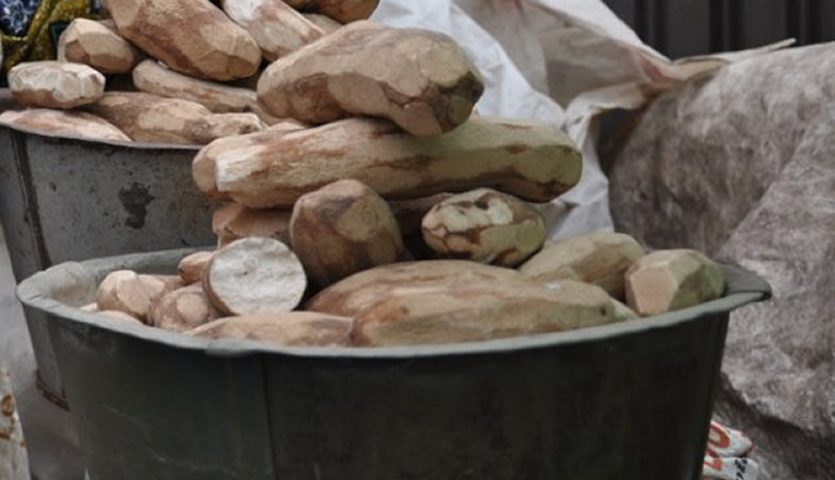 This is the most common type of àmàlà. The flour used is derived from yam. Yam, a common name for species in the genus Dioscorea, is grown in Africa, Asia, Caribbean, Oceania and Latin America. 95% of yam is cultivated and harvested in West Africa. Yam can be barbecued, roasted, fried, grilled boiled, smoked and grated. Àmàlà isu is made with yam flour that has been dried; this gives it a black/brownish colour when added to boiling hot water. Amala is high in carbohydrates and packs a lot of calories.

Yam is the common name for some species in the genus Dioscorea (family Dioscoreaceae). These are perennial herbaceous vines cultivated for the consumption of their starchy tubers in Africa, Asia, Latin America and Oceania. There are many cultivars of yam though only six are important as staples in the tropics. The economically important species grown are Dioscorea rotundata (white yam), Dioscorea alata (yellow yam), Dioscorea bulbifera (aerial yam), Dioscorea esculenta(Chinese yam) and Dioscorea dumenterum (trifoliate yam). Yams are high in vitamin C, dietary fiber, vitamin B6, potassium, and manganese; while being low in saturated fat and sodium.
Worldwide yam production in 2007 amounted to 52 million tons, of which Africa produced 96%. Most of the world’s production comes from West Africa representing 94%, with Nigeria alone producing 71%, equaling more than 37 million tons. Though yams can be stored up to six months without refrigeration most of the yearly production is lost through spoilage because of lack of post-harvest facility in the country.

·         Yam selection; fresh harvested yam gotten from the farm are sorted to select whole-some tubers that are suitable for the production of instant pounded yam flour. Usually the mature white varieties of yam are most suitable.

·         Washing; the yam tubers are washed properly in order to get rid of sand and other extraneous materials.

·         Peeling and slicing; the washed yam tubers are peeled and then sliced to desired thickness.

·         Parboiling; the sliced yam are then put into boiling water over a period of time depending on the thickness of the slices.

·         Drying; the parboiled yam slices are dried in a dryer at a specified drying temperature and time.

·         Packaging; the yam flour is the finally packaged in moisture proof nylon bags.

How To Eat Yam Flour

Àmàlà is a Nigerian food made out of yam flour and/or cassava flour. Yam flour is yam that has been peeled, sliced, cleaned, dried and then blended into a flour.  It is also called elubo. Yam is white in colour.  It turns into a brownish colour after it has been dried; this gives àmàlà its thick brown colour. Àmàlà is derived from Western Africa and is eaten mostly by the Yoruba people in Nigeria. It could be served with a variety of ọbẹ (soup), such as ẹfọ, ilá, ewédú, ogbono or gbegiri (black-eyed beans soup).

The yam flour is the most common type of àmàlà. The flour used is derived from yam. Amala can be easily prepared and eaten with any soup of your choice (Egusi, gbono soup, Efo Riro, etc.). Widely eaten in all parts of Nigeria but prominently served in Western part of Nigeria. Also used as a thickening agent in preparation of some soups. Abebi Foods Yam Flour is available in 1kg, 2kg and 5kg sizes.